The Reviews Are Coming! 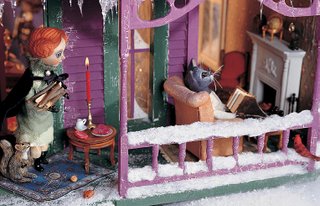 "Von Buhler builds the cumulative tale, adding ever more elaborate items. The fantasy creeps in quietly when the cat reads a book by the fire and it culminates in the surprise ending. The unique, eye-popping illustrations raise this work above the ordinary. Handcrafted, detailed set elements in a variety of materials, and three dimensional clay figures, create depth and texture. Each two-page spread provides the reader with a glimpse of a world beyond the frame...a sheer delight." -- Kirkus Reviews

"This cumulative story, told through staged photographs of an elaborate dollhouse set with characters created from clay, concerns a feral feline who is gradually coaxed into domestic life. "Come inside, kitty!" urges the genteel red-headed narrator when she spots a cat shivering on her snow-covered porch. This invitation, along with the response—"The cat ran away"—becomes the book's two-part refrain as the patient lady offers an ever-growing number of incentives to her visitor. As the list grows to "some warm milk, a plate of tuna, a catnip mouse, a soft rug, a ball of yarn, and a cozy armchair," the cat's defenses seem to melt (the yarn ball sends him into a Zen-like contentment). But he still insists on domesticity on his own terms; not until the narrator turns her porch into an open-air parlor does the cat settle in for good. Von Buhler's (They Called Her Molly Pitcher) 3-D settings and characters work considerable magic...Her feline hero possesses a wide repertoire of expressions, which makes him an effective comedic foil for the more conventional doll-like narrator, whose earnest, unflappable visage never changes. Readers with dollhouses and kitties of their own may well be entranced." - Publisher's Weekly

"...Cynthia von Buhler has a personal blog, where she writes about the book and invites readers to send in their own cat-inspired art and stories. There is also an extraordinary website set up to complement the book, which I highly recommend. It's enchanting and wonderful for kids. I spent a long while there myself; learning about the story, the characters and how they were made, and how the scenes were created. There are even directions on how to make your own Sculpey clay kitty. Hooray for such a lovely treasure to add to our bookshelves!" -- BloggingBaby.com
Posted by CVB at 11:49 PM 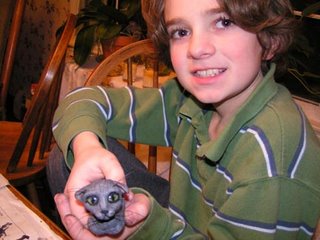 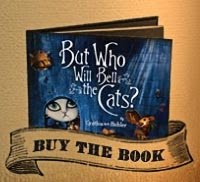